Back to our roots

Sometimes, we need to return to our roots I think.

When I purchased my first DSLR, a Canon xTi, I decided to take it over to Augusta, Georgia to shoot along the Riverwalk and try it out. The Savannah River was quite calm that morning and there was no boat traffic.  The old Southern Railway bridge was reflected in the water. The only thing that would have improved it, a steam train going across. 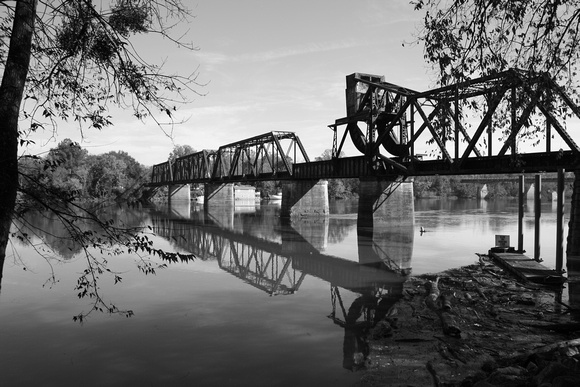 River ReflectionsThe ex-Southern Railway bridge is reflected in the still waters of the Savannah River at Augusta, Georgia.

The bridge is located at the Riverwalk Park in downtown Augusta and still serves the trains of the Norfolk Southern.

When I lived in Aiken, this was a favorite place to visit and photograph. I believe this was the only time I visited over several years when the water was this calm.

The only thing that might of made the image even a little more appealing to me would of been a train crossing the classic iron structure.

Years later, this shot is still one of my all-time favorites.  I was never able to duplicate that scene on numerous visits to the location while living in South Carolina.

The image was made as a jpeg.  I didn't know about RAW at the time and was converted to BW in the Canon software provided.  I wish I had a RAW file to process now as I think I could bring out some more details in the shadows, etc...

As we quickly approach the end of 2014, it is time to start thinking about 2015 and our goals as photographers. I'm hoping to do a better job than I did this year of getting out and shooting something every week.  I wish I could say "everyday" but with my work schedule "every week" seems like an achievable goal.

I also hope to do a better job of posting here on the blog. I look back and see some pretty "dry" periods.  My goal for 2015 will be to do at least one post a week. Hopefully, I'll exceed that.

Rusted Rail Images by Gene Bowker
That balance has been a big thing for me too, Steve

I've really backed off of G+ due to work over the last couple of months. Since this is a hobby to me, I have to remember that it can't always have first place in my life.

Next year, I'm planning on focusing more here and then trying to leverage that into the other social media types.
Steve Boyko(non-registered)
WOW - that is a great photo, Gene.

I've had my dry spots blogging too in the past few years. I've picked up this fall and winter and we'll see how it goes. It seems I have a finite amount of words I can post online and for a while G+ was taking them all. Still trying to find balance...
No comments posted.
Loading...
Subscribe
RSS
Recent Posts
Memorial Day South Carolina Swirls - the visual appeal of pipes. Cold day in Georgia UFO Welcome Center Look away or is it looking ahead? Steamy Morning BRP Tunnels Welcome Back A tender retirement
Keywords
Photography railroad Georgia Trains Americana 2020 Review 2014 day carolina
Archive
January February March April May June July August September October November December
© Gene Bowker 2022
User Agreement
Cancel
Continue